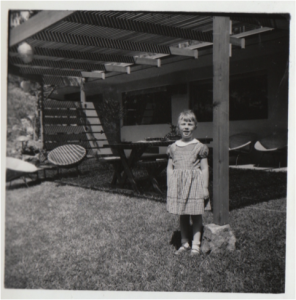 The Author & Artist in her first Studio

My mother, Pat Welsh, realized I had an aptitude for art at a very young age. Gallery of my current work. In the summertime she taught painting to some of my friends, my sister and me. Mother would encourage me to paint on warm summer afternoons when we were tired of playing imagination games or had had enough beach time for that particular day. I recall so vividly painting in the afternoon after lunch as I matured into adolescence.

To this day I actually remember the upwelling of joy I felt when painting some particular paintings at ages six to eleven years old. My Mom thought them special herself and saved these paintings, having them framed for my oldest daughter Yvette when she born.

Long before I vacationed with my husband and children on the Snake River in Wyoming I recollect painting a scene depicting two Indian men with their canoe. One Indian was leaning into the canoe, the other Indian to the side with a thick forest in the background. I took hours to paint this painting in watercolors. I really felt the Indians getting ready to take the canoe out onto the water. Possibly the games I had played as a very young girl influenced my deep emotion in painting this scene. I loved playing imagination games and I believe my mother encouraged us to play outdoors.

Indians was one of my favorite games. I was a squaw princess and my name was Falling Waters. I have no idea where I got that idea! But I loved the name and no other child could borrow the name, Not Even for one day of play. A little bossy I would say! In those days we had a huge area of Eucalyptus and Monterey Cypress trees growing out of sandy soil. It was a great place to play Indians! We also had an area on our property that had solid clay, which enabled us to have fun making clay pots and cups like the Indians did back in the day!

We were a neighborhood of girls and we all played together. There were at least seven or eight, Barbie, Katherine, Patty, Annette, Mija, Tina, my sister Wendy and me. There were actually more girls, but they were older than we. They played with us in a more in charge role like being mothers’ helpers. We adored these older girls, Joan, Trudy, and Chris.

On some occasions I remember playing at a friend’s house observing wide-eyed while the older sister got ready for a date, dreaming about the day that I would go to a dance all dressed up in a beautiful shiny dress having been given a corsage by a boy!

Painting is something I have enjoyed doing my whole life thanks to my mother’s encouragement to paint! As an abstract artist I paint my thoughts and feelings.

Did somebody tell you about watermelon Viagra? If you’re concerned about sexual disorder, you have to study about it. Erectile dysfunction, defined as the persistent failure to maintain an hard-on to the orgasm, exerts an estimated 15 to 30 millions men in the United States only. Because some of symptoms are medical emergencies, it’s considerable to know what to do if they happen. On occasion kidney disease will lead to erectile dysfunction. As a rule, this may include high blood pressure, anxiety, or a venous leak.