By Francesca on May 16, 2013 in Artists, Blog, Celebration, Event, Friends, Travel 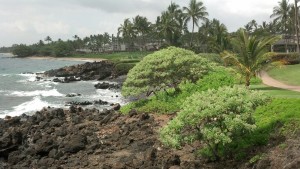 When our oldest child was a baby I used to say Yvette would be upset when she got older because she lived in Hawaii for almost half of her first year of life. Too young to remember the amazing time we had! Although being exposed to such beauty at a young age definitely went into her psyche.

That was the year that I said I had three summers! My husband, Pete, was working for the government installing the first computer system for the sewage treatment plant at Pearl Harbor. Yvette was three months old and we lived in Honolulu from October to November of 1976. We then returned to live there for the months of May and June in 1977.

In those days my folks used to vacation at a friend’s private shack in Kihei, as Betty called it, twice a year. They would go for two weeks in the fall and two weeks in the spring. Betty had a guest house on stilts. Rolling grass and palm trees extended out in front to her private beach. (Beaches in Hawaii are public, but her little beach was so secluded, being at the end of the road, it was rarely used.)

The view took one’s breath away! And the beach had the softest creamiest colored sand. The way the sand felt between my toes was like nothing I had ever experienced before. The ocean felt like velvet on my skin and the snorkeling off Maui was stupendous! The most colorful coral and water teeming with fish I have ever experienced to this day! The colors of the coral were every color in the rainbow and more; vivid pink, orange, blue, purple, red, violet and white!

Pete and I had decided we had seen the best and knew that the island had been developed. So we chose to remember Maui the way we experienced the Island staying with my folks one week in the fall of 1976 and one week in the spring of 1977.

As our girls grew up we vacationed on the North Shore of Kauai several times.We also frequented the Kona Coast of the Island of Hawaii and Oahu, but I had never returned to Maui until two weeks ago.

Naturally the development has continued on the island in the intervening years, but nonetheless I was not disappointed and had a fabulous time!

The very first day we arrived I found Betty’s Beach. The property is now covered with condos but the beach is the same! My friend and I stayed at the Maui Coast Hotel in the town of Kihei.

The hotel has good prices and they have a great concierge service with Expedia. Whether or not one choses to do some of the many activities the island has to offer, it is great to hear the options! We met in the lobby of our hotel with other guests to hear the fun things available to do! 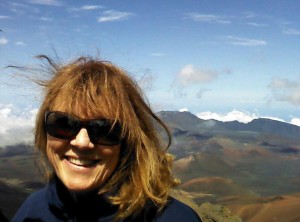 The author at the top of Mount Haleakala

We chose to go on a 45 minute helicopter ride that toured Molakai and Maui. We also chose to take the snorkeling trip to the Molokini Crater and lastly to take in a Luau at a neighboring hotel.

The day that we went on the helicopter tour, we then took a drive to Kula experiencing a botanical garden and then driving up to the top of Haleakala. The day was crisp and clear!

We ate dinner at the Kula Lodge on the way back to our hotel. It was beautiful and romantic. The views were spectacular and I would go there again even though the food was underwhelming.

The highlight of our snorkeling trip was a surprise sighting of whales fluke waving and breaching right in front of our boat! I was disappointed to discover that much of the coral has died and lost its color. Development and agriculture are the most significant threats to Hawaiian coral reefs because of runoff containing sediments (soil and silt) and chemicals and nutrients from lawns, farms, golf courses, construction sites, storm drains, cesspools and septic tanks. The runoff of sediment reduces sunlight penetration and smothers corals. The reef then starves to death because it can’t manufacture food from sunlight any longer.

We had a fun experience of being there the same week as some friends who showed us excellent snorkeling spots! Honolua Bay offered some great underwater sights. My friends had the amazing experience of swimming with a pod of dolphins back in the mid 1980s in this same Bay. Honolua has treacherous surf in the winter-time but amazing snorkeling in the spring and summer. 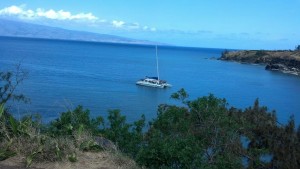 After visiting with friends in Napili Point we drove up around the end of the island. The road is a single lane in areas and rules dictate that the person heading downhill has to back up and make room for the person coming uphill, often a dangerous situation and the map reads,

The road around this north side of Maui is desolate but very picturesque. It also has a very narrow section of road and a sheer cliff and no guard rail before you reach Kahakuloa. Not for faint-hearted. Drive at your own risk.

All in all the eight days were fun, beautiful and had new surprises to offer!