I have three granddaughters, two who live in Spain. As a result I have been a Cyberspace Granny since they were born. SKYPE is so great because it gives one the opportunity to relate to the grandchildren even though one might be thousands of miles apart. 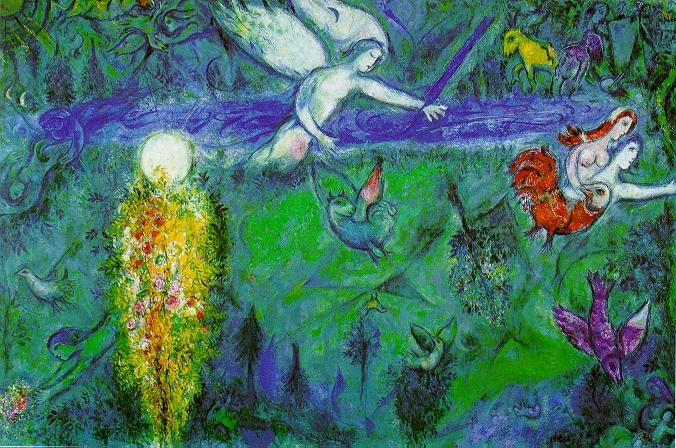 Adam and Eve Expelled from Paradise

The younger one in Spain is still a baby and I sing to her and play peek-a-boo. My oldest grandchild is her big sister and she is now five and a half. Anushka and I play on the computer. I also read her stories some of which Nana, my mother, has given her so that she has one book in Europe and the same book in the states when she comes here to visit. What my mother did not even think of and has worked out so great is that I can read to her over Skype and she can look at the pictures in her copy of the book. One of these books that we have two copies of is Barbar Comes to America. Barbar is a long story and we talk about what is happening on every page in the pictures. That usually takes several Skype sessions.

Anushka used to get the giggles and move me from room to room in her home in Spain, even onto the balcony that overlooks the horse pasture.

Now this is your home Mimi, and then she would burst out laughing.

It was really funny because little Mimi was in the computer. Sometimes she would take blocks and put them on each side of the computer to show my house and then she would put a towel over the screen.

Anushka would then throw up the towel and laugh hysterically. We have sometimes played for hours cooking and store, plastic horses, little dolls. Anushka used to say,

OK Mimi, I am the princess and you are my husband and I have 3 husbands.  Not all at the same time!

Oh yes, Mimi, at the same time! I get tired of one and then I have another prince.

And then Anushka makes her mouth in the shape of an O and then smiles, then laughs hysterically.

On my recent trip to Spain last month, after seeing the Chagall traveling exhibit in Madrid, Anushka and I both bought books depicting Chagall’s art.

After viewing the Chagall exhibit we went to lunch. We also bought in the museum store sketchbook paper and colored pencils. At lunch Anushka and I drew and looked at our books and compared the paintings. Anushka would show me a painting that she loved in her book and then I would do the same. We then talked about Chagall’s use of colors and depictions of scenes and emotions from his life including many brides and grooms. Anushka loved all the wedding paintings. As I mentioned in my last blog post she also loved all the animals in the sky. 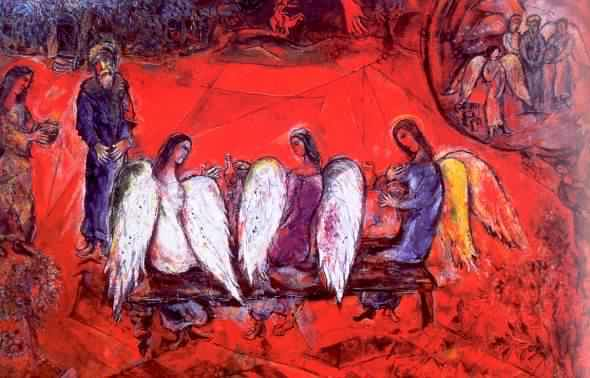 Abraham and the Three Angels

After I was home in California I Skyped with the family one day and asked Anushka if she wanted to go get her book with the paintings of Chagall. With a large grin on her face she said,

Our books are different and do not have all the same paintings. Anushka’s is a large soft back so easy for a child to turn the pages and not too heavy.

Ok Mimi, I show you, and Anushka proceeded to take her time to look thoughtfully through the book.

Oh this one Mimi, I think this one is very beautiful!

It’s a painting depicting three angels. Then I showed Anushka the one that is on this page. It was also in the exhibit.

We were showing each other our favorite paintings and describing them and telling each other why we liked them and then all of a sudden Anushka said, I don’t like this painting at all! 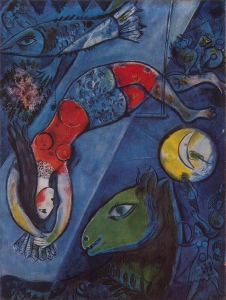 Chagall was so in love with his first wife and then she died. Anushka’s book had a picture that to her depicted the woman dead.

The woman is dead in this picture.

So then we discussed how that made Anushka feel, very sad.

At times life is really sad and great art can depict the sad parts of life. My Mimi, Anushka’s great-great-grandmother, used to say:

If you look at a great piece of art and look in one corner it may look very ugly but if you look at the whole painting it is so beautiful. The ugly part together with the beautiful part is the essence of making a particular painting great.

Mimi was also teaching me about life. Life has its sad and ugly parts but all together those parts can help us learn and grow.

So after revisiting the angel painting that was Anushka’s favorite, she said,

The Angels take care of us but we can’t see them.

About that time her mother came into the room.

Anushka we are going to take a walk now.

We say our goodbyes and blow kisses at the computer screen. I hug myself telling Anushka and her family I am hugging and kissing them.

Hugs and kisses and love till the next time we Skype and have another art adventure.

The world is a much smaller place than it used to be thanks to modern technology.