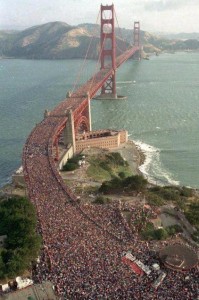 This past weekend I was in the San Francisco Bay area. Sunday was the 75th birthday of the Golden Gate Bridge. Check out the picture on the right and this video of the fireworks taken this last Sunday May 29, 2012.

“One aspect of the 75th birthday celebration that wasn’t in the plans was the rekindling of an old controversy. Who should get the credit for building and designing this spectacular bridge? The first design, from 1922, showed a bulky unattractive bridge, part cantilever, part suspension. It was the work of Chicago bridge builder Joseph Strauss, who had decided his legacy would be a span to rival the Brooklyn and George Washington bridges in New York.

But Strauss wasn’t a civil engineer. He was a builder of drawbridges, a promoter and organizer. And he organized a decades-long campaign to get the Golden Gate Bridge approved and built by him. Before construction began, Strauss’ clunky design was scrapped, though he remained as chief engineer. In its place was a sleeker structure made possible by University of Illinois engineer Charles Ellis and Leon Moisseiff, who had designed the Manhattan Bridge.” (PBS New Hour Interview)

Also Ansel Adams had photographed the space where the bridge now stands and was against the building of the bridge. He finally came to peace with the bridge when he photographed it in 1953. Click here to see Ansel Adams’ Before and After photos of the Golden Gate Bridge.

I will never forget the first time I was with my family driving over the Golden Gate Bridge as a little girl. Imagine a child’s dismay – the bridge was not gold, it was red! The fact that it was red instead of gold disturbed me for many years. Today I am just taken by its majestic beauty. 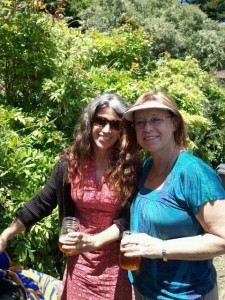 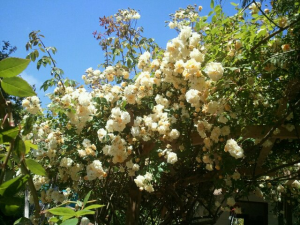 My father used to rouse the family in a song of California Here I Come. During vacations with my husband, Pete, and our daughters years ago; I led the song, much to the horror of my children! To this day I roll down the windows and belt out the song as I drive over the bridge. I have the opportunity to see the Golden Gate Bridge often and to drive across. The experience always takes my breath away. If I am not driving, I am snapping pictures. Shrouded in clouds, in rain or on the occasional clear day the view is always magnificent! 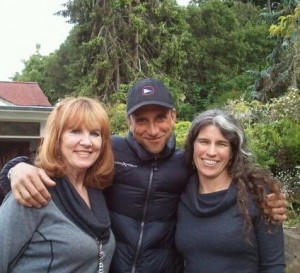 The Author, Cousin Jeremy and Lorraine

This weekend I went to Point Reyes station and Inverness for my cousin’s birthday. Lorraine lives with her family on eight acres surrounded by verdant gardens and nature. Friends and family came with delicious food. A friend raised and roasted a pig for the event. Oysters were abundant, found locally, raw and cooked on the barbecue.

Google weather fore-casted a cold rainy day but to the delight of the birthday girl and the rest of us there was sun to penetrate warmth on our backs and shoulders.

Here’s to celebrating life with family and friends!