Growing Sunflowers Can Be A Summer Passion! 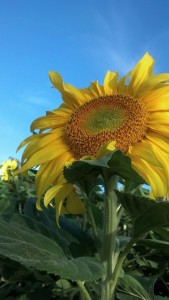 Sunflowers are so much FUN to Grow!!! If you have a place where you can put them every year they give so much joy! I smile every time I walk out and look at the field full of these tall prehistoric plants! Maybe that is why we love them so much! They have been around for a long time! And we feel the earth connection all the way back to cave man and beyond!

I actually did not know why I had never grown them.

In late June of 1996 Peter, Erica and I traveled to Madrid, Spain to see our older daughter Yvette who had been an exchange student from UCSD for the whole year. We then traveled by Eurail and Rick Steves suggestions of lodging and places to visit throughout Europe for one month! 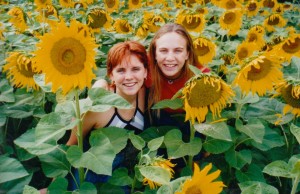 First stop off Eurail was the town of Arles, a town rich in Roman history and ruins in the province of Provence, France. We stayed in a small hotel for one week traveling to charming small towns such as Aix-en-Provence enjoying the multitude of nature’s sites through traveling through the countryside from small town to small town. The countryside was carpeted with fields of Sunflowers and fields of Lavender!  In breathtaking excitement the girls and  I ran into some of these fields and we could not stop taking pictures!  It was awe-inspiring to experience!

Several years later Peter and I moved to a property that had lots of land. I planted a Giverny style garden with Nasturtiums lining one of the paths all the way down to horses in pastures far below our home.  A girlfriend stopped by one day and exclaimed

Fran, why don’t you grow sunflowers!? I actually had no idea why I had never grown them! Especially since we had experienced the beauty and wonder of this ancient plant in the south of France a few years earlier! 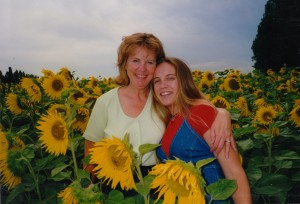 Fran and her daughter Erica in a field full of Sunflowers, Provence, France, 1996

I love the very tall ones! This particular girlfriend gave me a bunch of seeds. I planted them and WOW!!!! So much FUN! This year I am planting a second Parterre of them so I will still have some when my grandchildren come to visit in July! After planting the seeds I cover the area with netting so the crows don’t pull up my seeds. I put the netting about three feet high on stakes. When the Sunflowers reached the netting I remove the netting and they continue to grow up to eight or nine feet tall! This year I bought the seeds online; some for their height, some for their seed production, and some for the Mammoth flowers. And then it is FUN to sit and paint them or take pictures to put on Facebook 🙂 or just sit, smile and watch them grow. Have Fun Growing Sunflowers! 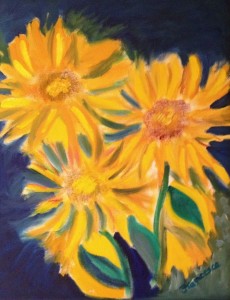 Oil on Canvas, Sunflowers by Francesca

Fossils of Ancient Member of the Daisy Family Discovered in Argentina

The Dutch born, post impressionist, artist Vincent Van Gogh famously painted a number of still life pictures of sunflowers.  One such painting was sold at auction in the late 1980s for a little under $40 million USD.  However, researchers at the Argentinian Museum of National Sciences have discovered their own “portrait of sunflowers” with the finding of two exquisitely preserved fossilised flowering heads in southern Patagonia (Argentina).  Sunflowers are members of the Asteraceae (otherwise known as Compositae – we think) Family.  This family of flowering plants (Angiosperms), is one of the most diverse and widespread of all the plant families.  This family includes plants such as the daisy, dandelion and commercially important plants such as the tea bush and sunflowers.

Plant material is rarely preserved as a whole fossil, for instance, a fossil of the entire plant with roots, leaves and flowers all together.  Fossils normally occur as isolated individual parts such as cones, pollen grains, pieces of trunk and such like.  Delicate flowering heads (capitula) are extremely rare in the fossil record.  However, the discovery of a fossil that shows two complete flower heads, winged seeds and the flower stem is helping scientists to understand the evolution of this very important group of plants.

The fossil has been dated to approximately 47.5 million years ago (Eocene Epoch) and it was found in strata along the Pichi Leufu river.  During the Eocene, this part of the world had a sub-tropical climate with average temperatures of around 19 degrees Celsius.  The dense flower-head would have been attractive to pollinating insects, suggesting that flowers such as these primitive ancestors of the sunflower already had a long established relationship with insect pollinators.

Dr. Viviana Barreda, one of the authors of the paper, the details of which have been published in the journal “Science”, suggests that the finding of this fossil supports the hypothesis that the ancestors of the Asteraceae Family evolved in the southern region of Gondwanaland and spread to most of this super-continent before this landmass began to break up.  This would explain the wide geographical dispersal of related genera.

Scientists believe that the common ancestor to a number of related plant families first evolved in sub-tropical Antarctica, (which was part of Gondwanaland), before migrating to Australia and South America as Antarctica cooled and became an unfavourable climate for most plant species.

Commenting on the discovery, University of Vienna (Austria) botanist, Dr. Tod Stuessy stated that this fossil and the related pollen grains were clear evidence of the existence of the sunflower sub-family at the early stages of Asteraceae diversification.  Dr. Stuessy wrote an accompanying article to the Argentinian scientific paper.  He went on to add that little is known about the origins of sunflowers and there is much still to learn about how these plants evolved and spread all over the world or indeed how members of the Asteraceae became so “incredibly diverse.”

The scientific paper on which the journal article is based is the culmination of two years of research.

Fran and Pete in the Sunflowers, France 1996

Did somebody tell you about watermelon Viagra? If you’re concerned about sexual disorder, you have to study about it. Erectile dysfunction, defined as the persistent failure to maintain an erection to the orgasm, exerts an estimated 15 to 30 millions men in the United States only. Because some of symptoms are medical emergencies, it’s considerable to know what to do if they happen. On occasion kidney disease will lead to erectile dysfunction. As a rule, this may include high blood pressure, anxiety, or a venous leak.